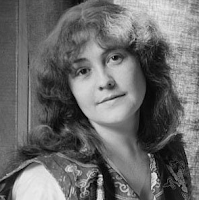 Rose O'Neill (1874-1944) = Self-taught Artist/Illustrator. Author. Free-Spirit. Poet. Best known for her Kewpie characters. Rose was born in Wilkes Barre, Pennsylvania in the summer of 1874 to "Meemie" Alice and William Patrick O'Neill as one child of seven. She attended a Catholic primary in Omaha, Nebraska and taught herself to draw by looking at illustrations in her father's books.

The Kewpies first appeared in 1909 as cartoon characters in the Christmas issue of Ladies' Home Journal and were regularly featured in other women's magazines for the next twenty-five years, however by 1912, German porcelain doll makers were creating dolls based on her Kewpie illustrations. She said  she wanted her Kewpies to teach people to be happy and kind.

She married twice, but chose not to become a mother of any chubby babies herself as she was supporting her large family with her work.

Bonniebrook in the Missouri Ozarks (Taney County) was Rose's favorite home. At the height of her career, she purchased other homes in New York, Connecticut, and in Italy. Near the west side of Bonniebrook, a small brook gurgled its way downstream which was said to have inspired the name for her home. At the top of the house was Rose O'Neill's studio, filled with treasures from friends and family. Her unusual, but favorite mode of dress for the times  were blousy aprons or kimonos over a Greek style tunic.

In the spring of 1944, Rose died of heart failure at the age of 69. She was buried near her family and Bonniebrook.

For Your Info: While I find Rose's Kewpies appealing, some of her other illustrations I find dark and disturbing. 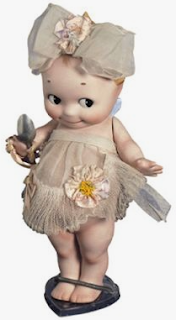 "Do good deeds in a funny way. The world needs to laugh or
at least smile more than it does."
~ Rose O'Neill

Born as Orion Clemence Heskin in Minneapolis, Hennepin County, Minnesota on 24 November to  Bertha M. (Sveen) and electrician, John S. Heskin. All his grandparents were born in Norway and emigrated to the United States before his parents were born. Life was rough growing up for Orion. By the time he was fourteen, his parents were divorced and he and his mother were living with his maternal grandmother.

His military registration records described him as a white young man, but having a ruddy complexion with brown-eyes and hair. He stood at 5 ft. 11 in. and weighed 195 lbs. at the time of his Navy enlistment in Los Angeles, California.
He married his wife, Lenore E. Hagg (1929-1985) in September of 1949 while living in California.

He wrestled from 1952 until 1971, won 385 times and was a Central States Heavyweight Champion and a World Tag Team Champion several times.

But none of his titles meant anything when God got hold of his heart and he began working with the Salvation Army, Young Life, Youth for Christ and founded New Life Ministries. He purchased  an old broken down, 3-story mansion in central Kansas City, Missouri and remodeled it so the young people in the area would have a nice place to hang out.

Sadly, Thor died 14 December 1982 of cancer and was buried in the Leavenworth National Cemetery in Leavenworth, KS. 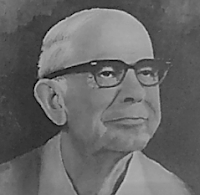 Albert Edward Brumley, Sr. (1905-1977) = Singing School Teacher. Gospel songwriter. Best known for " I Can Hear Them Singing Over There (1927);" "I'll Fly Away (1932);" "If We Never Meet Again (1945);" "They Have a Good Time on Sunday (1951);" and "Turn Your Radio On (1938)." Best guesstimates are that he wrote between 600 to 800 songs in his lifetime.
Albert was born near Spiro, Oklahoma to Sarah Isabelle (Williams) and William S. Brumley. He, the middle child of three, grew up in the cotton fields and on the family farm - hoeing, picking cotton, and chopping down the spent plants. It was hard work, but music made life bearable - his father played the fiddle,  his older brother played the guitar and he learned to play an instrument too. After completing the tenth grade, between 1926 and 1931, he studied at Eugene Monroe Bartlett's (1884-1941) Hartford Musical Institute in Hartford, Arkansas.
He married Goldie Edith Schell (1912-1988) in 1931 and together they raised six children - five bouncing boys and one sweet girl. It is said that Mrs. Goldie was a good encourager and wife for Mr. Albert. He was like Fred MacMurray in the movie "The Absent-Minded Professor" when he was in the zone, writing and creating and Goldie kept him on track.
In 1970, Brumley was inducted into the Nashville, Tennessee Songwriters Hall of Fame. He would go on to be  inducted into seven more Halls of Fame such as the Gospel Music Hall of Fame and the Oklahoma Music Hall of Fame.
Albert was a member of the Fox Church of Christ and was buried in the church cemetery after he passed into glory on the 15th of November 1977. Goldie graduated from earth to heaven ten years later. His work lives on. 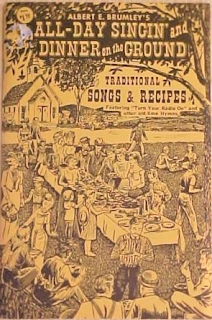 Places to Visit:
1. Powell, McDonald County, Missouri
2. Albert E. Brumley Parkway (a 13 mile strip between MO Highway E and MO Highway 76; between Rocky Comfort, Mo to  Pea Ridge, AR. It was dedicated in 1987)
3. Powell Bridge across Big Sugar Creek (This one lane bridge was built in 1915, is on the National Register of Historic Places and is only open to foot traffic.)
4. Brumley Gospel Sing, Cowan Civic Center, 500 E. Elm St, Lebanon

Homeschool Educator Helps:
Albert's favorite books were a rhyming dictionary and a thesaurus. He also carried a pen and paper with him wherever he went.
Posted by Rushd Lady at 3:52 AM No comments: 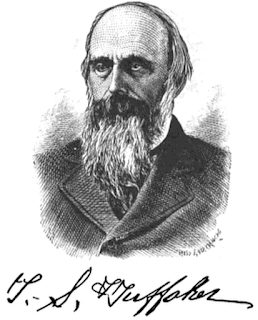 Eliza Ann Baker was born in Illinois to Agnes (Inghram) & blacksmith, Joshua W. Baker in 1836, raised in Iowa and married Thomas on 6 May, 1852 at the age of 16 in Council Grove by a missionary traveling to Mexico, one Rev. Nicholson.

Previous to their marriage, in 1850, Thomas  was sent to Council Grove, Morris County, Kansas as a missionary to teach the Indian children by the Methodist Episcopal South Board of Missions after he taught at the Shawnee Manual Training School in Johnson County for two years. Few Indians allowed their children to attend the Kaw mission school, so the mission closed within a few years. After awhile, when settlers began to settle around and in Council Grove, he taught the children of those settlers and began a Sunday School there. In addition to teaching, he engaged in a mercantile business, farming and raising farm stock.

They lived at the mission until a new fourteen room house was built for their family, eventually numbering twelve members, one quarter mile north of the mission. Thomas and Eliza celebrated their fifty-third anniversary there. After her father passed, a daughter, Anna Carpenter, sold her home on Second Street and moved to the mission in 1911 with her mother (1836-1920), living there until her death in 1921.

Both Thomas and Eliza were buried in the Greenwood Cemetery in Council Grove, Kansas. 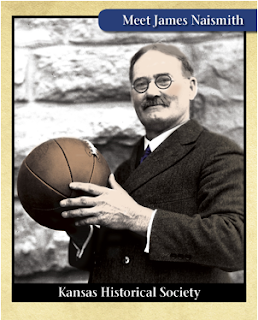 Dr. James Naismith (1861-1939) = Presbyterian Minister. Physician. Professor. Best known as the Inventor of Basketball. Born in Canada to John & Margaret (Young) Naismith who passed away when he was but eight or nine, he was raised by his grandparents and an uncle.
He attended courses at both the Presbyterian College and McGill University in Montreal, Canada and from there, in 1890 he entered the School for Christian Workers college in Springfield, Massachusetts. It was there that James Naismith came up with the new game. He was inspired by a Canadian game he played as a child, but instead of using rocks, he created his game to be played with a soccer ball and two peach baskets.
From Springfield, Naismith went to Denver where he finally acquired a medical degree at the Gross Medical College in 1898 and later, in the same year, he joined the University of Kansas faculty at Lawrence, Kansas. He initiated the first collegiate Jayhawks basketball game at the University.
Following the 1936 Olympics, he was offered thousands of dollars for endorsements of various tobacco products, which he rejected on principle -- tobacco was harmful to young people.
James was a papa to several children and a happy husband. He remained at Lawrence until his death in 1939.

Rushd Lady
I'm a sentimental romantic and self-taught creative with a degree: "MRS." in domestic engineering, am a former Sunday School teacher and homeschooled our special needs son, now a 30-ish young man. I'm currently researching my 3rd great-grandfather but love to explore my other interests as well.

BLOG BIOGRAPHIES:
* The content and links on this blog are subject to the owner's discretion and I have written them for the love of history, not profit.
* There is no guarantee that posts will be added to this blog within a specific time frame. Research takes time and is subject to information availability.
* The biographies are as accurate as possible, but they are only as good as the records I was able to obtain during research.
* Label: "Video" indicates I was able to find 1 or 2 YouTube videos pertaining to the person. You can find the videos in the Playlist tab link at the top of this page.
* There are NO Ghosts here, except the Holy Ghost!
~ ~ ~ ~ ~ ~ ~ ~ ~ ~
CITATIONS:
* If you use information from this website for a school report or for your online family tree, please cite my blog as your source.

* Good manners benefits everyone!
* Check the National Weather Service before venturing out to prevent tragedies. Tell someone where you are heading to.
* Follow signage. It's there to inform you and for your protection.
* Tidy up after yourself and deposit trash in the proper waste receptacle.
* Remove only what you brought in with you. Do not take souvenirs from the site; purchase them at the site's gift shop, if you must have one. They fund the care of the site with your dollars.
* Ask permission to take photos, especially inside museums as your camera's flash light may damage artifacts.
* Plant a tree in honor of someone!

You will find us listed here:

Contributed to The Pioneer Wagon: 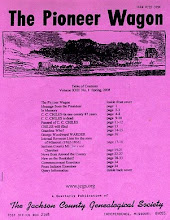 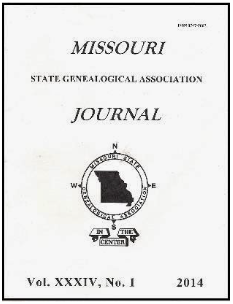 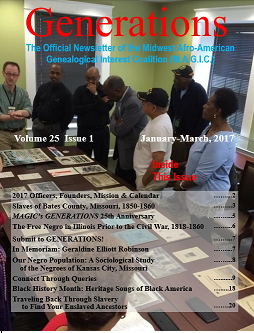 a newsletter of the Afro-American genealogy group M.A.G.I.C.